What a week!  To play an Open at Royal Portrush, one of my favourite courses in the World, was simply brilliant.  Naturally I was extremely disappointed to have missed the cut – there is never a week when I miss the cut that I am not disappointed, but last week was harder to take than most.  I could go into the reasons I missed and the crucial holes, but I think given the week and the result we had, they are somewhat irrelevant.  I know my game is very close to some really good stuff and had hoped it would happen on the Links Swing (Irish Open, Scottish Open and Open Championship) culminating with a great week in Northern Ireland, but it wasn’t to be.

Its not that I am not able to identify what cost me doing well, it is just that I want to talk more about what a great week it was and what a super winner we got in Shane.

In all my years as a professional, I can’t remember coming away from a Major, or any tournament for that matter, where there was no negative comments.  The whole field fell in love with Royal Portrush and it was great to hear players, caddies, and managers all asking why it took so long to go there.  The R&A did a magnificent job in taking the Open there and then in setting up the course as it was.  It played very fair all week; if you hit a good shot you were rewarded and penalized for a bad one.  The crowds at Opens are always great with their support for all players, but last week I felt that they excelled themselves.  Yes they got behind all of the Irish players a little more than everyone else, but it was only a little.  Every player left commenting on how good the support was.

I have been lucky enough to have a successful career as a professional and to win two Open Championships.  My two wins were in contrasting styles and nerve racking in their own way.  However I will say I was a lot more nervous watching Shane on Sunday than when I was out there winning mine.  I found myself dwelling on every possible negative outcome while watching him, whereas when you are playing you get on with the job in hand.

I have spent a lot of time with Shane over the last few years and have become great friends.  To watch him win The Open was amazing but when you add in the way he played to blow the field away, my hat goes off to him.  I didn’t get to see any of his first two rounds as we were only a couple of groups apart but I watched all of his weekend play.  The round of golf he played on Saturday was truly fantastic and to go out in the final group leading The Open and shoot 8 under par is amazing golf.  It is hard to explain how tough it is to have the lead for as long as he did and to win, but for the whole weekend he looked in total control of his game. He was under pressure right from his first round yet he looked as if he was out for a stroll.

I am truly delighted for Shane, his family, Bo his caddy and all of his team, and I don’t think there is a person in golf that is not happy to see Shane lifting the Claret Jug.  My biggest disappointment is that I am not around this week to help him celebrate.  I am off to Reno for the Barracuda Championship, but look forward to sitting down with him later in the year to chat about it and celebrate with him.  For now, well done Champion Golfer of the Year 2019!  Enjoy the party. 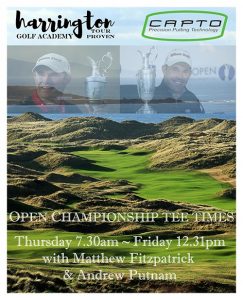 Padraig got the start he needed in the second round as he raced to three under par after seven holes. He birdied both the par fives on the front nine and also had a deuce on the par three 6th hole. A dropped shot on the par four 8th hole had him out in 34 shots. This left him right on the cut line which hovered between one and two over par all afternoon. Dropped shots on the 13th and 14th holes were off set by a birdie three on the par four 15th hole but he just couldn’t find more birdies on the finishing three holes. One over par finally made the cut leaving the pre tournament favourite, Rory McIlroy, out for the weekend. On a brighter note, fellow Irishman, Shane Lowry is tied for the lead of the Open Championship at eight under par heading into the weekend!

Padraig opens his account at Royal Portrush with a four-over-par round of 75. He got off to the perfect start with a couple of birdies early on to be two under par after five holes. Three dropped shots saw him out in one over par. The back nine seemed to play tougher during the day as the players saw all four seasons throughout the day and it proved so for Padraig. He only picked up one shot coming home on the par-four 17th hole but also had three dropped shots! He tees off Friday late at 12.31pm.

Padraig is at Royal Portrush in Northern Ireland to compete in the last major of the year, the Open Championship. It carries poignant memories for him as a two-time winner back in 2007 at Carnoustie and 2008 at Royal Birkdale. He also played Royal Portrush many times as an amateur and held the course record at one point. It is an exciting week as the course will favor no particular group of players and the weather will determine the winning score. The last and only occasion the Open Championship was played on the island of Ireland was 1951 at Royal Portrush where the winner was Max Faulkner.

Padraig tees off at 7.30am Thursday and 12.31pm Friday with Andrew Putnam and Matthew Fitzpatrick.