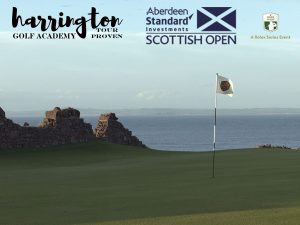 A disappointing day for Padraig in Scotland as his three-under-par halfway total misses the extraordinarily low cut by two shots! He got off to a poor start with two bogies on the front nine which had him out in two over par and struggling. He rallied well around the turn with two birdies on the 11th and 12th holes and even though he added another one on the par-five 16th hole, two late bogies cost him a place in the weekend draw. He now travels to Royal Portrush for the Open Championship. He has fond memories of the Dunluce course as he held the course record for some time there and with two Open Championship trophies, he can never be discounted around a links course especially if it plays tough!

Padraig opened his account in Scotland with a pleasing round of four under par 67. Starting on the back nine he got off to the perfect start with a birdie three on the tenth hole. A dropped shot on the par-five 12th hole was quickly erased with back to back birdies to be out in two under par. He again started nine holes with a birdie before another dropped shot. Two consecutive birdies on the way home saw him sign for a four-under-par round. He tees off Friday in the second round at 1 pm local time! Eight under par leads and Padraig currently is in a tie for 29th place!

Padraig is in Scotland this week for the Aberdeen Standard Investments Scottish Open. It is the third event in the Rolex series and is a prelude to the Open Championship at Royal Portrush next week. It is being played at the Renaissance Club which has been getting rave reviews for its topography and course routing. Eight major champions tee it up this week in a star-studded field which includes American superstars, Rickie Fowler, and Justin Thomas. The prize fund this week is yet again a massive $7 million and it promises to be an exciting couple of weeks of golf on the European Tour!

Padraig tees off at 8am in the opening round with Guido Migliozzi & Marcus Kinhult!

We use cookies to ensure that we give you the best experience on our website. If you continue to use this site we will assume that you are happy with it.OkPrivacy policy