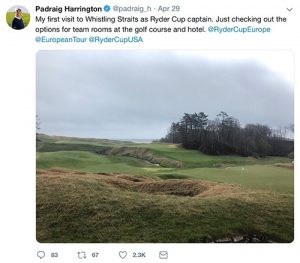 Padraig shoots a second round of 75 to miss the cut at the Wells Fargo Championship. He got off to the perfect start with a birdie but five bogies and a double bogey on the par three 17th hole did the damage. He found water on a couple of holes off the tee which makes it difficult around this demanding golf course. He will be hoping a couple of more weeks of playing with have him ready for the second Major of the year, The USPGA at Bethpage Black.

Disappointing opening round of four over par 75 leaves Padraig with a mountain to climb to make the cut at the Wells Fargo Championship. He got off to a poor start with dropped shots at his opening holes where he missed the fairway off the tee. He steadied the ship with nine straight pars before making a double-bogey six on the par four 12th hole. He hit back straight away with two nice birdies but undone his good work with another double-bogey six on the tough par four 18th hole. Four under par leads after the opening round and he tees off late Friday at 1.20pm.

Padraig is at one of his favorite courses on the PGA Tour this week, Quail Hollow in Charlotte, for the Wells Fargo Championship. He hasn’t played in the Wells Fargo since 2016 but is a firm fan of Charlotte. Jason Day is your defending champion this week. Padraig tees off at 8.10am local time with Will MacKenzie and Brandon Harkins.